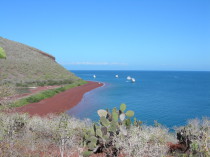 The Galapagos Islands (Spanish: Islas Galápagos, official Archipelago de Colón) are a group of islands scattered to the equator in the Pacific. They are in the open sea at about 1000 km from the west coast of South America and belong politically to Ecuador.

The islands are geologically very young: a few million years. They are of volcanic origin. There are many unique animals and plants, which each island often slightly different species have formed. The whole Archipelago is situated on the nazca plate and is moving each year about 9 cm towards the South American continent.

Charles Darwin visited the Galapagos with his research ship Beagle in September 1835 and took about five weeks to study the geology and biology of four of the islands. Due to his findings during this visit to the archipelago Darwin developed his theory of evolution. On the Galapagos Islands you will find different kinds of animals such as sea lions, iguanas, sharks, birds, frigate birds, blue-footed boobies, penguins, turtles and more! Admire the Islands in the Galapagos during one of the cruises or land tours that you can make.