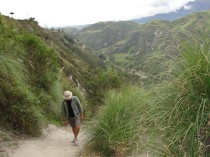 Like no other country in South America, Ecuador offers plenty of options for all kind of mountain sports. The Andes cross the country from North to South in two parallel lines on a total length of about 500 km. The valley between those two lines was called street of volcanoes by the German naturalist Alexander van Humbold. A name which is still up to now used, since you find plenty of peaks of volcanoes, which measure up to 6.300 meter. Generally the eastern cordillera is higher and in its' appearance is more uniform than the western.