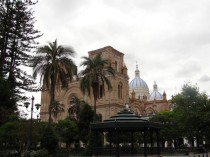 The first recorded inhabitants in Ecuador go as far back as 10,000 BC. During that time settlements were established by hunters and gatherers at the coast and in the mountains.

In the mid- 15th century the Incas invaded from the South. In the beginning, their leader Tupac Yupanqui met strong resistance by three indigenous tribes. But when his son, Huayna Capac, took over the lead, the Incas were able to defeat the natives and imposed their culture. Rapidly, they extended their empire, introduced the language Quechua, (which is still spoken by many people in Ecuador today), built massive cities, and established their well developed road and communication system.

In 1532 the Spanish conqueror Francisco Pizzaro landed at the Pacific coast with the goal of seizing the wealthy territory. Despite a long fight, in the end, the Incan leader Atahualpa was captured and executed. The Incan empire fell and the Spanish colonialists took over.

While the Spanish were ruling for almost 300 years, they had a heavy influence on the Ecuadorian culture; both in positive and negative ways. The Europeans implemented Roman Catholicism, cattle, new crops, and the Spanish language, which today is the country’s official language and spoken by the majority of the people. The architecture is also strongly shaped by colonialism. At the same time, many natives died due to unfamiliar diseases, indigenous were forced into a labor system, and Africans were brought to work as slaves on the sugar plantations.

On May 24th in 1822, Ecuador gained independence from the Spanish, when Antonio José de Sucre won the battle of Pichincha. As a result, Ecuador joined Simón Bolívar’s Gran Columbia, a republic also including Columbia and Venezuela. 8 years later, in 1830, the country reached complete independence. It became the Republic of Ecuador with Quito appointed as the capital.

Throughout the 20th century, the policy of Ecuador was shaped by dictatorships and military juntas. Democracy was reinforced in 1979, and free elections have been hold since. Currently, the economist Rafael Correa holds presidential office after his re-election in 2013.