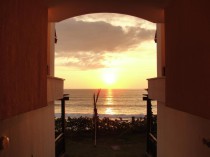 Due to its location near the equator, Ecuador is an ideal all year round travel destination. The climate just varies greatly between the 4 geographical regions because of the difference in altitude and closeness to the ocean with its currents. In general, there are only two obvious season - the wet and the dry season.

Generally, the climate doesn’t vary much throughout the year. In the Andean valleys, you will find a constant cool and spring like weather every month. The temperature depends a lot to on the height above sea level and the proximity to the equator line. In Quito, the average temperature during the day lies around 21C (70F) and drops to an average of 8C (46F) at night.

In the highlands the dry season lasts from June to September and is also found in the months of December and January. But even the rest of the year, known as the rainy season, is not extremely wet. During that time most of the days start with sunshine and comfortable temperatures in the mornings followed by recently light showers in the afternoons.

In the Amazon rain forest, it has got a lot of rain year-round. The climate can best be described as wet tropical. August and December until February might be the driest months. Due to the extreme humidity, the temperatures are stable and high during the day (26C/79F) as well as during the night (17C/63F).

Despite many cloudy days, all along the Ecuadorian pacific coast line, there are constantly high temperatures. Only the humidity and with it the flora and fauna vary depending on the region. The climate is also heavily influenced by the currents of the ocean. El Niño, coming from the North, brings warm air and lots of rain. The cold Humbolt from the South, on the other hand, limits rainfall and causes a light drop in air and water temperatures. Therefore, on the coast you will find a wet and a dry season, as well. However, the rainy season is short, only lasting from January until April.

Despite their location right at the equator line, the climate on the world famous Galapagos Islands is not typically tropic. The main reason for that is the fact that it is surrounded only by water since it is located 100km west of the Ecuadorian mainland. Caused by the currents El Niño and Humbolt, there are two obvious and very diverse seasons at Galapagos. From June to December it is dry and cooler, because the Humbolt current, while heading north, brings cold air from the Antarctic. With air and water temperatures between 21C to 23C (70F-75F), either the sun is shining or the sky is covered by a layer of high atmosphere mist. The months of January until May can best be described as the wet season. El Niño causes a high amount of rain and rising air temperatures, as well as warmer water. During that time of the year, it is nicely warm by 25 to 28 degrees Celsius (77F-83F). The ocean with temperatures of 24C or 25C (76F or 77F) invites to swim and snorkel.

Basically, Ecuador and all 4 geographical regions can be travelled every time of the year. There might only be some months which hold advantages for certain activities for example the wet season for canoeing and the dry season for trekking and mountain climbing.

Especially on the Galapagos Islands, all year round tourists are able to observe a huge variety of species. The wet season is maybe preferred for swimming and snorkeling, while the dry season provides perfect conditions for diving.

Normally, the country’s high season is during the months of December and January as well as from June to August. Then, prices for accommodation, arrival and tours are slightly higher and reservations are recommended.